Charley was first introduced to golf aged two, and began playing with her father at Kettering Golf Club. She left school aged 13 to be homeschooled. As an amateur she had quite a bright career and was ranked in the top-10 of the World Amateur Golf Ranking. Years later we can still see her same putting technic. 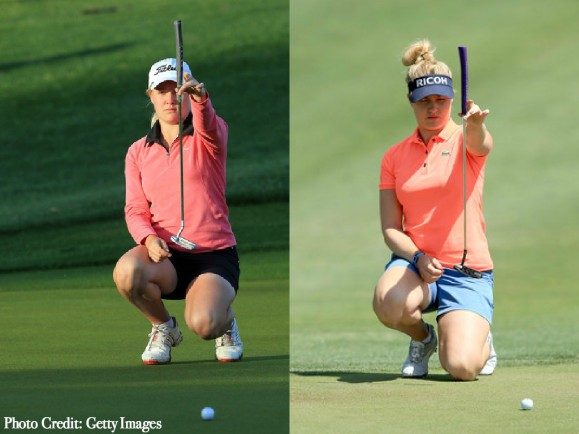 Joanna started playing golf at the age of 7 and credits her dad as the person most influencing her career. She really enjoys skiing, skydiving, being outdoors, classical music concerts, operas and ballets. Klatten has been working out to improve in every part of her game her effort is paying off.

Karrie is one of the most successful female golfers and is now a member of the World Golf Hall of Fame. She started playing golf at the age of 8 and credits her parents Rob and Evelyn and coach Kelvin Haller as the individuals most influencing her career. Her hobbies include reading, basketball and fishing. The years go by and Karrie just looks greater and better.

Webb’s first win was in 1995 at the Weetabix Women’s British Open.

Alison is one of the rookies for this 2015 season on the LPGA tour and she has already awakened the interest of many after her great performances. She started playing golf at the age of 6 and credits her dad as the individual who influenced her career the most. Lee earned her LPGA Tour card by sharing co-medalist honors at 2014 Qualifying School.

Alison won the inaugural ANNIKA Award, given to the nation’s top collegiate female golfer after the 2013-14 season at UCLA.

Carlota started playing golf at age 5 and credits her dad as the person who most influenced her career. She is a sports fanatic specially when it comes to soccer and tennis; her biggest hero is Rafael Nadal. Ciganda has one of the most particular swings on tour and it has remained almost the same through out the year.

One thought on “LPGA’s throwback Thursday”